We all have our habits. For example, while one of them presses the snooze button about 10 times, the others bounce out of bed the first time the alarm goes off and stand in the bathroom two seconds later. It is similar with showering. Either you shower in the morning or in the evening (some even twice a day) – that's up to you all BUT there is actually the right "shower time" from a medical point of view.

Showers in the morning

In a study of 1,000 women, it was found that people who jump into the shower in the morning are happier and more beautiful. 90% of respondents said a shower would improve in the morning all day long. Reason enough to get up 15 minutes earlier? No? Then take a look:
Two-thirds of women even said that they feel much more relaxed and attractive after taking a shower. Do not be surprised. Somehow you can wash away a lot while showering. Worries for example. Another study has shown that cold showers even help with depression. So in the end, turn up the water ice cold again! Who should take a shower in the morning?
People who find it difficult to get into gear in the morning but have to deliver creative work. Psychologist Shelley Carson says that one has in the shower time in the morning more of an "aha" moment and thus more motivated goes to work. Carson explains that you get into a total state of relaxation during the shower, but the Alpha Brain continues to work. The same thing happens during a meditation or after a sport. Our tip: Already have a notebook in the bathroom! Write down good thoughts immediately before they get lost again. 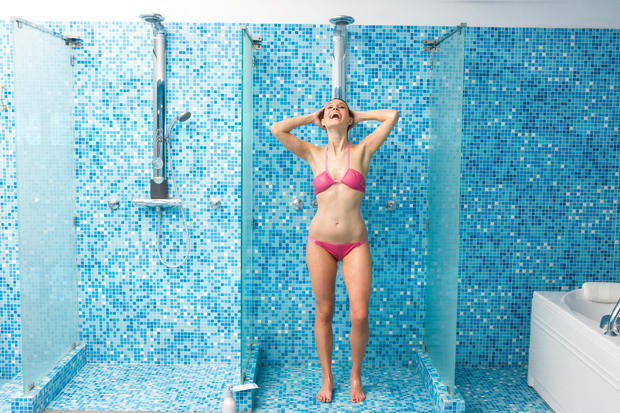 Showers in the evening

If on the other hand it is difficult for you to switch off in the evening and relax then you should relocate your showers to the evening. Christoph Winter of the American Academy of Sleep Medicine advises: "Even in the evening you should turn the water cold at the end of the shower." Why? Because this is a natural way to prepare the body for sleep. Body temperature rises during the shower, but sinks as soon as you're outside and dry yourself. The cold shower at the end, however, raises your own body temperature. Who should take a shower in the evening?
Relaxing evening showers reduce our cortisol level (stress level) and relieve stress. So we sleep better! So if you have trouble falling asleep, take a shower in the evening and wash away the stress of the day. Tip: Use a body oil with lavender, lemon balm or orange fragrance after the shower. The fragrances help after a stressful day and you feel completely comfortable and ready for bed. 5 scents – 5 effects

Why do you get freckles?